The Communist Party of China Central Committee proposed to remove the expression that the President and Vice-President of the People's Republic of China "shall serve no more than two consecutive terms" from the country's Constitution.

As analysts were quick to point out, that seemingly minor change effectively allows China's current leader, Xi Jinping. to become "dictator for life". It wasn't just Westerners who were taken aback by the unexpected boldness of the move. One of the leading China experts, Victor Mair, explained in a post on his Language Log blog:

for as long as I've been studying China and observing Chinese affairs, I've never witnessed so much opposition to the CCP [Chinese Communist Party] as what I've been seeing and hearing during the last couple of days -- except for the months leading up to the Tiananmen Massacre of June 4, 1989.

But as he points out, the big difference between then and now is that today people can turn to the Internet to express their feelings. Naturally, that has led China's huge censorship machine to go into overdrive, leading to some really weird bans:

since the Roman alphabet is part of the Chinese writing system, it's only fair for letters to be subject to censorship the way Sinographs are. Comments like this Twitter thread show the letter N being censored on Weibo (a microblogging website that is one of the most popular social media platforms in China). This is probably out of fear on the part of the government that "N" = "n terms in office", where possibly n > 2

China Digital Times notes that the block on the letter "N" was only temporary, but that doesn't mean the censorship was eased. On the contrary. The same post lists dozens of words and phrases that are forbidden because they contain direct references or even just allusions to the move to make Xi Jinping's rule life-long. Here are some of the less obvious ones:

Winnie the Pooh -- Images of Winnie the Pooh have been used to mock Xi Jinping since as early as 2013. The animated bear continues to be sensitive in China. Weibo users shared a post from Disney's official account that showed Pooh hugging a large pot of honey along with the caption "find the thing you love and stick with it."

The Emperor's Dream -- The title of a 1947 animated puppet film.

trust this woman is willing to be a vegetarian for the rest of her life -- Allusion to a meme inspired by the popular historical drama Empresses in the Palace. A screenshot of this line, being said by an empress as she pledges lifelong vegetarianism in return for the imminent death of the emperor, has been shared online.

Many activists received warnings not to make negative comments about the planned change. Some that did had their online accounts permanently disabled for daring to discuss the matter. The degree of censorship was so great that it led to people being "blank-screened", as Yuan Yang reported on Twitter:

Friend: *sighs, looking at her smartphone*

Me: You've been what?

Friend: It's the word for when all the people you're following on Weibo (China's Twitter) have their accounts censored so your live feed is now a blank screen.

But as Techdirt has noted before, the Chinese online world has plenty of experience in circumventing censorship in clever ways. Here's a fine example of that, noted by Owen Churchill: 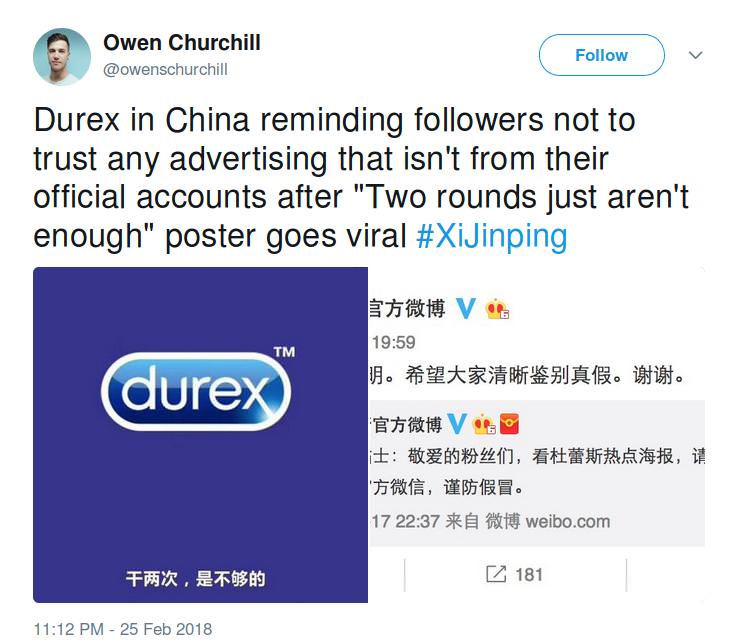 The characters on the fake Durex ad are rather more explicit than "two rounds", which seems appropriate given what many people think Xi Jinping is doing to the Chinese people with this proposed change to the country's constitution.